If yeast is pitched when the wort is too hot, at worst the yeast will be killed and at best it will produce off flavours or foam out of the fermenter, or both.

The temperature of the wort needs to be below about 25 degrees and ideally close to 20C for most ales when the yeast is pitched, for fermentation at 18C to 20C in most cases. Lager yeast should be pitched at a slightly lower temperature than ale yeast, then have the temperature reduced to fermentation temperature in the range of 7C to 13C, depending on the yeast and style of beer.

Kit brewers generally don't need to worry about cooling the wort because only a small amount of hot water is used to dissolve ingredients, steep grain or boil hops. Topping up the fermenter with cold tap water usually cools the wort to a temperature at which the yeast can be pitched.

However, in partial mash or malt extract beers where the quantity of boiling liquid is greater or in warm climates where the tap water is warm, the temperature of tap water may not bring the wort down enough for yeast to be pitched where it will do its best work. This calls for the malty liquid to be cooled before adding it to the fermenter.

The easiest way is to put the hot liquid in a saucepan then place it in a sink of cold water, stirring the liquid with a sanitised spoon every five minutes or so and changing the cold water if it becomes warm. This will cool the liquid enough so that the wort temperature will be about right when the fermenter is topped up with cold water. When you add the cooled wort to the fermenter, try and leave behind any trub may have settled at the bottom of the saucepan. The best way to do this is to employ a whirlpool.

Some brewers freeze plastic bottles and put them in the fermenter to cool the wort. If you do this, make sure that you sanitise the bottles before you drop them into the fermenter, paying particular attention to nooks and crannies around the lid. There's no need to remove the bottles once they've done their job; leave them there until you rack, bottle or keg.

Another approach is to freeze cooled, boiled water and add the ice directly to the fermenter. Beware though — the freezer is a hotbed of bacterial action so make sure you sanitise the containers the ice will be made in and make sure the container is sanitised and covered well in the freezer.

All-grain brewers have two option to get wort to pitching temperature: force chilling the wort or using the so-called "no-chill" method.

If you decide to chill your wort, getting it to pitching temperature as quickly as possible is critical so that wild microbes that would love to settle in your wort and take hold don't get a chance before the yeast is pitched. Another benefit is that rapid chilling helps precipitate out proteins and hop particles from the the wort, which can then be left behind when the wort is transferred to the fermenter.

There are several types of wort chillers available to homebrewers.

An immersion chiller is a coil of several metres of copper or stainless steel tube that is submerged in the wort a few minutes before the end of the boil to sanitise it. At flame-out (when the heat is turned off), cold water is run through the coil, which cools the wort. The wort will eventually be lowered to a yeast-pitching temperature and can be transferred to the fermenter. Whirlpooling, or stirring the wort when the water is turned on then leaving it, thus causing the wort to pass across the pipe carrying the cool water, increases the efficiency of an immersion heater.

The downside of immersion chillers is that they use more water than other chillers. That may not be a concern if you run the water into a washing machine or have a rainwater tank from which you can draw the water and to which you can return it. A big advantage of immersion chillers is that they are easy to clean and sanitise because wort is only ever exposed to the outside surfaces.

In a plate chiller, the hot wort is run between plates through which cold water is running in the opposite direction. If the rate of wort flow is correct, the cooled wort that runs into the fermenter will be at pitching temperature. A plate chiller is a little like a radiator in a car. Plate chillers are quite efficient in the amount of water they use. A disadvantage is that because wort travels through them, care must be taken to be meticulous with cleaning so that no wort is left inside on which mold can grow, and ruin future brews. See the tutorial on three-vessel brewing for pictures of a plate chiller in action.

This method involves transferring the hot wort to a sanitised plastic container, squeezing as much air out as possible and sealing it, then allowing it to cool naturally. Wort can be stored for months in the container because it sterile. When the time comes to ferment the wort, it is transferred to the fermenter and aerated, and the wort is pitched.

The wort needs to be transferred to the container — often referred to as a cube, regardless of its shape — using a hose coiled in the bottom of the vessel so that as little air as possible is admitted to the liquid. Admitting air at this stage of fermentation can lead to "hot-side aeration", which causes off flavours in the fermented beer.

The cube should have as little head space as possible when full. Squeeze the container before sealing it so that the the liquid is as close to the top as possible. It's usually the case that containers hold more hot wort than their claimed capacity. For example, most 20-litre containers should hold 23 litres of wort. Any air-tight, food-grade plastic container that does not melt is suitable.

Here are a couple of examples of wort in a cube, from the brew-in-a-bag tutorial and the Braumeister tutorial, respectively: 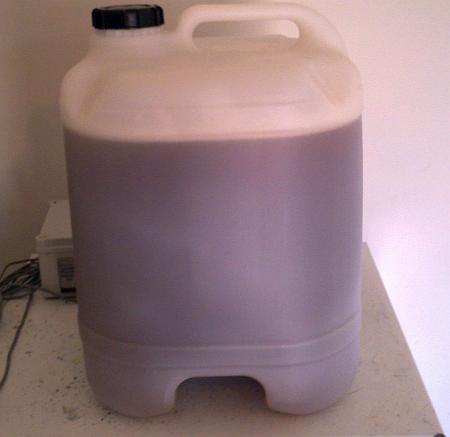